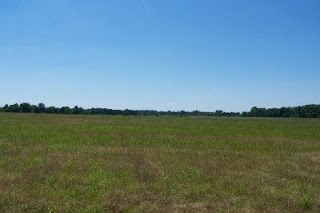 Note: If you aren't familiar with the Pea Ridge battlefield, you can use this map from the National Park Service to help understand the sites we'll be describing over the next few days.

As he arrived with his division at Leetown to the right and rear of the Federal right flank and found the Confederates there in force, Union Col. Peter Osterhaus deployed his infantry along a treeline and sent his cavalry forward into an open field. They were quickly driven back by Confederate cavalry.

The Confederates greatly outnumbered Osterhaus and planned to launch three separate attacks on this segment of the battlefield. General Ben McCulloch planned to attack Osterhaus' infantry with his man force, while Col. Lewis Hebert moved through Morgan's Woods and struck the Federal right flank. General Albert Pike's warriors from Indian territory would operate on the Confederate right.

Gen. McCulloch rode forward to take a closer look at the arrangement of the Union lines before launching his attack. It proved to be a fatal decision. He was shot and killed by Federal skirmishers.

His second-in-command, General James McIntosh, now assumed command of the attack. He was killed less than 15 minutes later, however, while leading a regiment forward. The Confederate attack disintegrated as command and control broke down on the battlefield. Other Confederate officers had no way of knowing that both generals were dead and so no one stepped forward to assume command of the attack. Osterhaus had held.

Col. Hebert was now the division commander, but had already moved with his men into Morgan's Woods following orders to attack the Union right flank. He drove back two Union regiments and captured part of a battery, but his attack became disorganized in the thick woods. Things became so confusing that some Confederates fired into the backs of their own men.

Since the attack on his front had fallen back, Osterhaus now swung his command to the to the right and struck Hebert's flank. Another force of Union troops under Col. Davis soon attacked the Hebert's other flank and his command disintegrated. The colonel himself became confused as he tried to escape the debacle and went in the wrong direction, only to be captured near Curtis' headquarters.

The Confederate attack at Leetown had failed and two promising Southern generals - Ben McCulloch and James McIntosh - had been killed. The Battle of Pea Ridge, however, was just beginning.

Our series on the battle will continue in the next post. Until then you can read more by visiting www.exploresouthernhistory.com/pearidgeindex.
Posted by Dale Cox at 10:57 PM