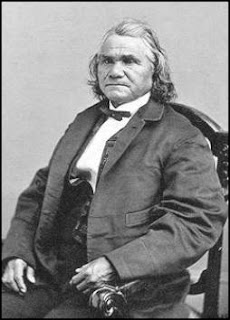 Brig. Gen. Stand Watie, the only Native American to be commissioned as a general by the Confederacy, played an important role in the war along the Arkansas-Oklahoma border.
A Cherokee warrior, Gen. Watie was the owner of a large plantation before the war. A long-standing opponent of the John Ross party that then help power in the Cherokee government, Watie sided with the Confederacy while many of his political opponents sided with the Union.
His reputation as a bold and fearless cavalry leader was well deserved and he achieved some of the most dramatic victories of the Civil War.
On July 31, 1864, Watie took part in a bold demonstration against the Union defenses of Fort Smith. Hoping to snap up Federal outposts and supplies and provide military protection for local Southern sympathizers who wished to evacuate the area, Confederate Gen. Douglas H. Cooper moved up the Fort Towson Road (today's Towson Avenue) against the southern defenses of Fort Smith at sunrise.
The advance was headed by Watie, who overran a Union outpost and then drove retreating Federals ahead of him all the way up to the earthworks that ringed today's downtown area. It was a bold and rapid attack, characteristic of the general.
Cooper's demonstration was never intended to be a full assault on Fort Smith, but he used Watie's bold attack and a subsequent show of force to intimidate the Federals long enough to inflict considerable damage and allow civilians wishing to evacuate the chance to do so.
Posted by Dale Cox at 1:54 PM