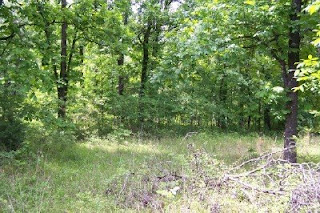 After Union troops occupied Fort Smith at the time of the Battle of Devil's Backbone in 1863, the Confederate forces in the region experienced a severe phase of demoralization. Hundreds of men (many of them probably more loyal to their region than to either cause) switched sides, slipping away from the Confederate army and joining the Union army that now occupied Fort Smith.
Many of these men were used to form the basis of what was expected to be a new Union regiment, the 4th Arkansas U.S. Infantry.
The 4th, however, never reached full regimental strength. During the most successful period of its formation, it achieved enlistments of 173 men (including officers and a surgeon). This was a sufficient force to form about three companies.
The men were placed in a training camp on Massard Prairie during the spring of 1864. They occupied three company-sized campsites in the woods seen here. The area then was an open grove of trees watered by a small stream.
These men were called "Arkansas Feds" by the troops of both sides. Confederate troops, obviously, had little use for them. Northern soldiers, meanwhile, were often suspicious of their loyalties. The men of the 4th became so irate at their treatment by their own (Union) army, in fact, that they sent a protest letter to the Little Rock Unconditional Union in July of 1864.
The letter provided revealing insights into the mindset of the "Arkansas Feds" in the last year of the war. After express their outrage at being mistreated by their Northern comrades, even though they had joined and were serving in the Union army while their own families were unprotected and subjected to bushwhacker raids, they continued:
Under these circumstances we came to lay our all on the altar of our country, many of us having competent estates. We never owned slaves, no! We never bought one, sold one, held an interest in as much as old Shylock’s pound of human flesh. We come with clean hands, we are Union soldiers, and like the Romans of old, we call on the army and the community to award us the honor and distinction due to American soldiers as long as we are faithful.
Posted by Dale Cox at 10:59 PM