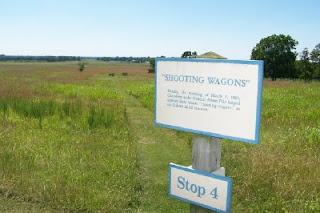 As we continue our series on the Battle of Pea Ridge, Arkansas, please remember that you can access a map of the battlefield by clicking here.
The photo here shows the view from Tour Stop 4 on the tour road at Pea Ridge National Military Park. This was Foster's Farm at the time of the battle and was the scene where the Union cavalry collided with McCulloch's oncoming Confederates shortly before the action at Leetown (described in our last post).
After forming his division along a tree line, Col. Osterhaus sent forward his cavalry and three field guns to confront the Confederates and unveil the situation. As the Union horsemen emerged into the fields of Foster's Farm, however, they were stunned to see the 8,000 men under Gen. McCulloch advancing on across the same fields. The Union cannon opened fire, but McCulloch sent Gen. McIntosh sweeping around from his right to charge the severely outnumbered Federals. As the Confederate cavalry came storming down on them, the Federals broke and ran after a short fight and Southern troops overran their supporting cannon. The Confederates continued to advance and the battle moved into the phase that we described in yesterday's posting on Leetown.
Among the Southern troops that fought here at Foster's Farm was the Indian Brigade under Brig. Gen. Albert Pike. Composed of warriors from the Indian Territory (today's Oklahoma), this Native American Confederate force was involved in capturing Union artillery, called "shooting wagons" by some of the warriors. They also successfully ambushed two companies of Iowa cavalry.
After the battle, Union troops discovered the scene of this ambush. Among the bodies littering the ground they reported that they found the remains of 8 men that had been scalped and another 17 that had been mutilated. The U.S. Congress launched an investigation into the incident and leveled the blame on Pike and his Native American warriors.
It should be noted that scalping and mutilation of dead enemies held ceremonial importance among some Native American tribes during the 18th century. It was a way of assuring that enemies would be much weaker in the next world. It is also worth noting that early white officials in the Southeast encouraged some of these practices, often allying themselves with specific tribes and rewarding war parties for every scalp they brought back.
Our series on the Battle of Pea Ridge will continue. Until then, you can read more by visiting www.exploresouthernhistory.com/pearidgeindex.
Posted by Dale Cox at 2:07 PM