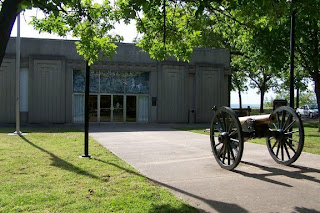 Historic Prairie Grove Battlefield State Park in Northwest Arkansas plans to commemorate both the Christmas season and the 147th anniversary of the Battle of Prairie Grove with special events next weekend, December 5 & 6.
Hindman Hall Museum will be open for free on both Saturday, December 5th, and Sunday, December 6th. Visitors will also be able to watch reenactors perform infantry drills Saturday and see demonstrations of cooking, spinning weaving, lace-making and more. Tours of the historic Latta and Morrow houses will be given on both days at 9:30 and 10:30 a.m. and 1:30 and 2:30 p.m. The restored houses are decorated for Christmas in Civil War fashion.
The Battle of Prairie Grove was fought on December 7, 1862, at the climax of Confederate General Thomas Hindman's march north into the Ozarks. A tactical draw, the brutal fighting became a significant Union strategic victory when Hindman was forced to admit he could not defeat Federal forces with the number of troops and ammunition at his disposal.
The battlefield is located in the heart of the town of Prairie Grove, just west of Fayetteville in Northwest Arkansas.
To learn more about the battle, please visit www.exploresouthernhistory.com/ArkansasPG1.
Posted by Dale Cox at 5:26 PM No comments: