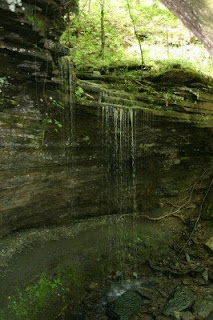 The Confederates rode north from Ozark into the mountains following a path then known as the Mulberry and Frog Bayou Road.
Parts of this road followed the same general path as today's Pig Trail Scenic Byway (so named because it is a popular route for fans on their way to see Arkansas Razorbacks' football games). The road leads through particularly spectacular scenery including mountains, rocks, streams and waterfalls. The lightly flowing falls seen here are Pig Trail Falls.
It took two days for the Confederates to cross the mountains, but by the night of April 17th, they were on the outskirts of Fayetteville and so far the Federals had no idea they were coming.
The attack struck at 5 a.m. on the morning of April 18, 1863. Coming in on the Huntsville Road (a modern city street still bears that name), the Confederates overran a Union picket post and swarmed up into the ravine or small valley dividing the downtown area from East Mountain (today's Mt. Sequoyah).
The Federals did not know that danger was present until they heard the gunfire from the attack on the picket post. Col. Harrison reported that he could hear the Southern troops coming with "wild and deafening shouts."
His troops reacted well to the emergency. The men of the 1st Arkansas U.S. Infantry quickly formed on their parade ground, which lay in the downtown area south of Dickson Street and west of College Avenue. Falling back ahead of the oncoming Confederates, the infantrymen rallied on the men of the 1st Arkansas U.S. Cavalry, who were forming into line.
Because his infantry men had not yet received their uniforms, Harrison was concerned that they might fall victim to friendly fire. As a result he sent most of them to the rear to a sheltered position behind the hill on Maple Street. Seven companies were placed in this position.
The remaining three infantry companies were formed into a line with four companies from the 1st Arkansas Cavalry around the Tebbetts or Headquarters House on East Dickson. These units formed the center of the Union line of battle. To their right was positioned the cavalry battalion of Major Ezra Fitch and to their left was posted the cavalry battalion of Lt. Col. A.W. Bishop.
Thus formed, the Union line stretched from southwest to northeast from about the intersection of Block Street and Meadow Street across the primary intersection of Dickson and College Avenue, across the grounds of the Headquarters House and on off into the open fields (now residential areas) to the northeast.
Our series on the Battle of Fayetteville will continue. Until the next post, you can read more by visiting our new Battle of Fayetteville pages at www.exploresouthernhistory.com/battleoffayetteville.
Posted by Dale Cox at 11:33 AM