To help you better visualize the tactics of the Battle of Poison Spring, I prepared the map below using information from the forms submitted for the Red River Campaign National Landmark designation.
The troop positions shown here are approximate and are merely intended to provide an idea of how the battle unfolded, so they are not scale and are generalized. The gray lines represent the positions of the Confederate troops as the battle developed. The blue line represents the position of the Union wagon train during the battle. As with most maps, north is up, south is down, west is left and east is right. 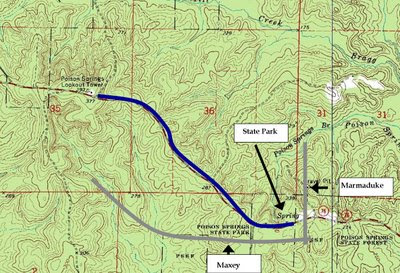