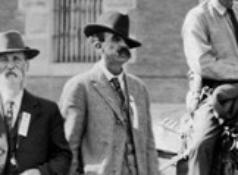 Charles Portis has said that the unforgettable character Rooster Cogburn from his 1968 novel "True Grit" was actually a composite of the Deputy U.S. Marshals that once rode out of Fort Smith, but there is strong circumstantial evidence that he relied heavily on a real life one-eyed marshal named Cal Whitson.

Whitson, in fact, was the only Deputy U.S. Marshal with one eye to ride from Fort Smith in the decades after the Civil War and there is much about him that resembles the character made famous by John Wayne. Rooster will be reborn later this month when the new version of "True Grit" hits theaters.

For those unfamiliar with the story, a young girl from Yell County named Mattie Ross seeks out a man with "grit" - in this case, Deputy U.S. Marshal Rooster Cogburn - to track down the man who killed her father. The two set off to Winding Stair Mountain (in Oklahoma south of Fort Smith) to apprehend the outlaw and bring him to justice in the court of Hanging Judge Isaac C. Parker.

The Rooster Cogburn in the book and movie is a former Civil War soldier who works as a Deputy U.S. Marshal in the Western District of Arkansas. Working from Fort Smith, the old soldier is missing an eye and is a rough and tumble character of the first order.

Calvin W. Whitson, similarly, was a former Civil War soldier who worked beginning in 1889 as a Deputy U.S. Marshal in Fort Smith. His father had died in Van Buren in a murder that strongly resembled the death of Mattie's father as described in the book. Whitson joined the 3rd Arkansas Cavalry (U.S.) in 1863 when he was still one month shy of his 18th birthday, but was discharged the following year after being severely wounded in action. The wound blinded him in one eye. He went on to work in law enforcement after his son was killed helping to apprehend an outlaw in the Indian Territory.

In an interesting note, while checking out Cal Whitson's military service record this week, I noticed that some of his service cards were transcribed by a government employee named "Daggett." The name is familiar to all fans of "True Grit" because young Mattie constantly speaks of her feared attorney, "Lawyer Daggett."

If you would like to read more about Cal Whitson, the man who may have been the "real" Rooster Cogburn, please visit www.exploresouthernhistory.com/roostercogburn.
Posted by Dale Cox at 6:16 PM

Fascinating stuff! The intriguing Daggett reference is neat, too.

David, Thanks! After seeing the new version of the movie - which is great, by the way - I am even more fascinated by the connection.

Being a Whitson myself, I have thought the very same thing. I believe you're right about them being the same person.

I love this movie. True Grit, was doe so well. Gllad to have found information on Cal Whitson.I will research more and hope to learn more.