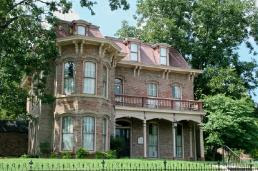 This old brick building on College Avenue in Canehill holds a unique place in the history of Arkansas. It was the last structure built to house Cane Hill College, one of the most remarkable educational institutions of the 19th century.

Northwest Arkansas was still the frontier in 1834. Fledgling settlements were taking root, one of the most important of which at the time was actually made up of a series of three communities located atop a ridge known as Cane Hill. Surrounded by good farm land in the shadow of the Boston Mountains, the settlement was well populated and a center of of activity by the Cumberland Presbyterian Church.

By the fall of 1834, the progress of the community had reached a point to allow the early settlers to think of such things as schools for their children. On October 28th of that year a group of Cumberland Presbyterians met and voted to establish Cane Hill School, which opened the following year in a two-room log building.

By the time of the Civil War, the school had progressed to become the first four-year college in Arkansas and was operating from a campus of four buildings. When most of the students of the all male school enlisted in the Confederate army in 1861, Cane Hill College closed its doors for the duration of the war.

By the end of the war much of Cane Hill had been burned to the ground and only one building from the pre-war college survived. The school would rebuild and go on to become the first coed college in Arkansas and shortly afterwards graduated the first five women to receive four-year degrees in the state.

The growth of Fayetteville and establishment of what would become the University of Arkansas, along with a destructive fire in 1885 ultimately led to a decision by the Arkansas Synod to close the doors at Cane Hill in 1891 and relocate the school to Clarksville where it continues to thrive today as the University of the Ozarks.

The building built to house the college after the 1885 fire still stands, however, and is a unique and special part of the heritage of Arkansas. To learn more, please visit www.exploresouthernhistory.com/canehillcollege.
Posted by Dale Cox at 4:28 PM No comments: