Castle Morgan - Point of Origin for many of the Sultana victims 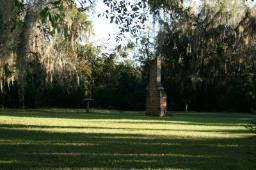 The wreckage of the ill-fated steamboat Sultana was found some years ago buried beneath a soybean field near West Memphis. The Mississippi River has changed its course over the years since the war and now flows about two miles away from where the Sultana went down in 1865.

One of the best-known tragedies of the Civil War, the sinking of the Sultana took place when the overloaded paddlewheel steamboat tried to carry more than 2,000 released Union prisoners of war up the Mississippi from Vicksburg. A boiler explosion (or torpedo, according to one post-war confession) ignited a fire on the boat and the loss of life was horrendous. It is thought that around 1,800 men died in the fire and sinking. Another 300 died from burns and other wounds in the weeks and months after the accident.

Among the former p.o.w's aboard the Sultana at the time of the accident was a large group of soldiers from the Cahaba military prison at Old Cahawba, Alabama. Also known as "Castle Morgan," apparently in honor of Confederate General John Hunt Morgan, the prison was located in a never completed cotton warehouse overlooking the Alabama River. Conditions were abysmal, but the death rate at Castle Morgan was relatively low when compared to other Civil War prisons.

When the prisoners were freed at the end of the war, they were taken first to Vicksburg.From there they embarked for home aboard the Sultana, which went down in Arkansas on April 27, 1865.

The ruins of the Cahaba prison are now preserved as part of the Old Cahawba Archaeological Site near Selma, Alabama. To learn more, please visit www.exploresouthernhistory.com/oldcahawbaprison.
Posted by Dale Cox at 1:18 PM No comments: 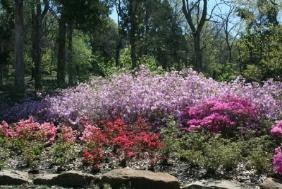 This one is not Civil War related (although the nearby Honey Springs Battlefield is well worth a look), but one of my favorite events in the region moves into high gear this weekend.
Saturday will be the main day for this year's Muskogee Azalea Festival in Muskogee, Oklahoma. The annual festival is one of the finest such events in the South. Honor Heights Park, where the main festival is held, will feature carriage rides, food, activities for kids and lots more this on Saturday. The park features one of the finest settings of azaleas and dogwoods you will find anywhere. They have more than 600 varieties growing in beautiful plantings that you can explore by either walking or driving.
The festival is free to explore, although various attractions like the carriage rides do charge. Some other unique events goiing on in conjunction with the festival are trolley rides through historic parts of Muskogee, an art exhibition at the Five Civilized Tribes Museum, a chili cookoff and more.
Muskogee is an easy drive from much of western Arkansas and is only an hour or so from downtown Fort Smith. If you are interested in learning more, please visit www.exploresouthernhistory.com/okmuskogeeazalea.
Posted by Dale Cox at 6:35 PM No comments: