I'm pleased to let you know that The Battle of Massard Prairie: The 1864 Confederate Attacks on Fort Smith, Arkansas is now in stock and available through www.amazon.com.

They can deliver the books by Christmas, so if you would like a copy as a gift for someone else (or for yourself!) there is still time to order. Just follow the link above and search for "battle of massard prairie."

The book is also available at Prairie Grove Battlefield State Park in Northwest Arkansas and at the Fort Smith Museum of History in Fort Smith.

Published earlier this year, the book explores the July 27, 1864, Battle of Massard Prairie. Fought on the outskirts of Fort Smith, the battle was an overwhelming Confederate victory and was unique from a number of perspectives. You can learn more about the battle itself by visiting www.exploresouthernhistory.com/massardprairie. 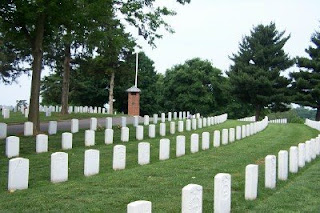 The recent anniversary of the Battle of Prairie Grove, Arkansas (December 7, 1862), brought several questions about the locations where casualties from the battle were buried.
The battle was one of the bloodiest ever fought west of the Mississippi. Of the more than 3,000 casualties reported by the two armies, 339 were found dead on the field following the battle. Hundreds of other men died in the following days and weeks from wounds they had received.
The dead of both sides were initially buried on the battlefield and, as is usually the case, some probably remain there to this day.
In later years, however, efforts were made to collect the bodies for reburial in permanent cemeteries. The Union dead that could be located were taken to Fayetteville National Cemetery and the Confederates were reburied at the Confederate Cemetery in Fayetteville. Hundreds of markers, many of them simply denoting the graves of unknown soldiers, can be found in the two cemeteries today.
Other Southern wounded from the Battle of Prairie Grove died after arriving back in Van Buren and many are also buried at Fairview Cemetery in that city.
All of the cemeteries are open to the public on a daily basis, as is Prairie Grove Battlefield State Park. To learn more about the battle, please visit www.exploresouthernhistory.com/ArkansasPG1.
Posted by Dale Cox at 2:16 PM No comments: 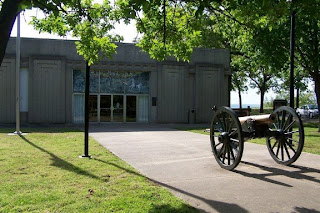 Events commemorating both the 146th Anniversary of the Battle of Prairie Grove, Arkansas, and the 100th anniversary of the establishment of the battlefield park will begin tomorrow (Friday) at Prairie Grove Battlefield State Park.
The park is located on U.S. Highway 62 only about 10 miles southwest of I-565 at Fayetteville.
Admission to the park, reenactments and other events will be free for the weekend, but there will be a $4 parking fee for all vehicles.
Here is the official release from the park outlining times and events:
Prairie Grove Battlefield Historic State Park will host the 2008 Battle of Prairie Grove Reenactment Special Event on December 6th and 7th, with approximately one thousand living historians on hand to interpret the life of soldiers and civilians during the Civil War. On December 7, 1862, about 22,000 soldiers fought an all-day battle at Prairie Grove, Arkansas, with casualties reaching 2,700. Everyone is invited to see the battle demonstration each day at 1:00 p.m., held on the actual battlefield near the historic Borden House. During the reenactment weekend there will be many activities, including guided tours through the Union, Confederate, and civilian camps, various military drills, cooking, spinning and lace making demonstrations, along with other living history programs. “Sutlers Row” will feature a number of vendors selling 19th century reproductions, books and other supplies throughout the weekend. Prairie Grove Boy Scout Troop #48 will have concession stands in the park. There is a cost of $4.00 for parking.
146th anniversary of the Battle of Prairie Grove will be celebrated with the unveiling of a new original oil painting by Andy Thomas, who will be onsite to sign limited edition prints of the painting. The unveiling will take place at 11:00 a.m., Saturday, December 6th, during the Battle Re-enactment This is the second painting of the Battle of Prairie Grove; “They came like demons” is set on the western side of the battlefield at the Morton House with an emphasis on the Confederate troops. The first painting focused on the eastern side of the battlefield at the Borden House with an emphasis on the Union troops.
The battle demonstrations begin at 1:00 p.m. each day, and features charges and counterattacks by Union and Confederate infantry and cavalry. A number of cannons will be positioned in support of the two armies firing loud, smoky rounds of black powder. The sights, sounds, and feel of a Civil War battle are brought to life through this event. Afterwards, the wounded are gathered and taken for medical treatment. The battle demonstration will be fought in the same direction as the original battle along the Prairie Grove ridge, with enough room for everyone to see what is taking place during the conflict. Remember to bring chairs. Activities start at 8:00 a.m. when Hindman Hall opens to the public with its exhibits, video programs, diorama of the Prairie Grove battle and gift shop. The soldier and civilian camps open at 9:00 a.m. with guided camp tours at posted times. These tours take visitors through the various camps and talk about the life of the common Confederate and Union soldiers, as well as the impact of the Civil War on civilians. Visitors are encouraged to wander the grounds and talk with reenactors. Visitors will be able to visit the medical department where soldiers would have been treated for a variety of ailments. Ladies will be demonstrating the art of spinning, lace making, and cooking over a fireplace throughout the weekend. Additional living history programs include training sessions for soldiers in all three branches of army service—the infantry, cavalry, and artillery. The only charge will be a $4.00 parking fee during the re-enactment weekend. Hindman Hall Museum & Visitor Center entry is free of charge during the reenactment weekend, open daily from 8:00 a.m. until 5:00 p.m. For more information, contact the park: Prairie Grove Battlefield State Park, 506 E. Douglas Street, Prairie Grove, AR 72753; or call (479) 846-2990, between 8:00 a.m. and 5:00 p.m.; e-mail prairiegrove@arkansas.com.