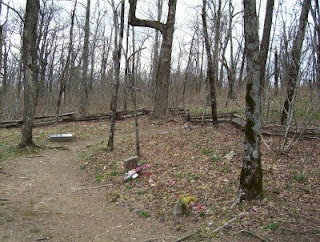 Deep in the Ouachita Mountains of Arkansas, a small community of settlers struggled through the brutal years of the Civil War in almost total isolation. Their existence is memorialized today by the Rich Mountain Pioneer Cemetery on the Talimena Scenic Drive near Queen Wilhelmina State Park.
Most of these people simply wanted to be left alone. Their daily efforts to scratch a living from the top of the mountain occupied them far more than the issues behind the war that then raged across much of the continent. Some came to escape the ravages and raids taking place in more accessible areas of the state. Others were "Mountain Feds" or Union sympathizing Arkansans who fled to the mountains to avoid being conscripted into the Confederate military.
Regardless of their reasons for going high up on the mountain, the people living there during the war barely survived. Severe winter weather, hunger and sickness stalked the community. One of the more tragic stories of the time is still remembered today in the form of a ghost story about a young girl who went to a spring to obtain water for her sick family only to be cornered in a tree by wolves. Her body was found the next day, frozen stiff in the tree where she had sought shelter.
Now part of the Ouachita National Forest, little remains other than the cemetery to remind modern visitors that the community ever existed. The cemetery is located just west of Queen Wilhelmina State Park. Interpretive signs and a short pathway to the burial ground are maintained by the Forest Service.
To learn more, please visit www.exploresouthernhistory.com/richmountainghost.
Posted by Dale Cox at 12:00 AM