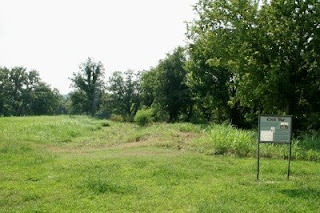 Although it is located across the line in eastern Oklahoma, historic Fort Gibson played a major role in the Civil War in Arkansas.
The old fort near Muskogee was the base for operations against Fort Smith in 1863, a campaign that resulted in the occupation of the Fort Smith area by Union troops and the Battle of Devil's Backbone.
After Federal troops occupied Fort Smith, the two installations were closely linked. Soldiers and supplies constantly moved back and forth between the forts, and in the process often provided tempting and easy targets for Confederate forces. General Stand Watie, for example, targeted steamboat traffic between the two forts with great success in 1864.
Union troops went to extraordinary steps to defend Fort Gibson during the war. The encampments were surrounded with strong earthworks, a small portion of which can still be seen at the historic site. They also launched an attack that led to the Battle of Honey Springs during the summer of 1863 in an effort to defend the post against a rumored Confederate attack.
If you would like to learn more about this historic fort, which was a major installation on the Oklahoma frontier for much of the 19th century, please visit www.exploresouthernhistory.com/okfortgibson.
Posted by Dale Cox at 2:13 AM