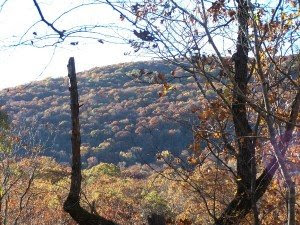 The mountains that surround Devil's Den State Park near West Fork in Northwest Arkansas are the location of a wide array of historic sites.

One of the most significant is the trace of the old Butterfield Stage Line route, which passes through this valley and is now a hiking trail accessible to park visitors. Established in 1857 to link the cities of St. Louis, Missouri, and San Francisco, California, the Butterfield line was one of the most remarkable commercial enterprises in American history.
With 250 stagecoaches and over 800 employees, the stagecoach line began delivering mail along a more than 2,000 mile route connecting St. Louis and San Francisco in 1858. Sections of the original road, which was also known as the Telegraph or Wire road, can be seen at several locations in Arkansas. One part passes through Pea Ridge National Military Park in Benton County, while another section is still used by modern traffic in the Rogers area. A third section passes through Devil's Den State Park.
The outbreak of the Civil War brought the Butterfield line to an end just three years after it began operation. The section of the route through Devil's Den was used during the war by both Union and Confederate troops, as well as by the guerrilla bands that hid out in the Boston Mountains.
In addition to the old stagecoach route, now called the Butterfield Trail, Devil's Den State Park also preserves beautiful mountain terrain that includes bluffs, rock formations, caves, the largest sandstone crevice area in the United States, caves and more. To learn more, please visit www.exploresouthernhistory.com/ardevils1.
Posted by Dale Cox at 4:43 PM