Unique Tribute to a Civil War Act of Mercy 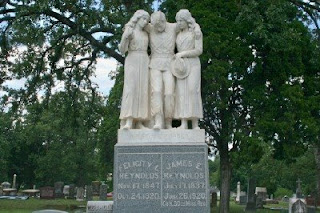 This unique statue at Fort Smith's Oak Cemetery marks the grave of James E. Reynolds.
Reynolds rose through the ranks of Company K, 30th Mississippi Infantry, during the Civil War, eventually becoming its captain in 1865. He was wounded at the Battle of New Hope, Georgia, during the Atlanta Campaign. After the battle, he was rescued from the battlefield by two local teenage girls with other women of the area to help the wounded. It was a gesture of mercy that Reynolds never forgot.
He went on to become a successful business leader in eastern Oklahoma and western Arkansas during the decades after the war and is remembered as the builder of Oklahoma's unique Captain's Castle in the small town of Cameron near Fort Smith. In his beautiful home he dedicated a room to Confederate heroes, decorating the walls with flag-draped portraits of famed Southern leaders. He called himself an "unreconstructed Confederate" all of his life, but did offer to fight for the United States during World War I and even contacted the famed Confederate "Gray Ghost" John S. Mosby to discuss forming a unit of aged Southern soldiers to fight in Europe.
Reynolds and his wife Felicity, a descendant of the famed Choctaw leader Greenwood LeFlore, both died in 1920. Over their graves was erected a monument in the form of a statue of a wounded Confederate officer being helped from a battlefield by two young girls. It was Reynolds' final tribute to the memory of the two young Georgia girls who helped him at New Hope Church more than fifty years before.
To see a larger photo of the Reynolds' monument, please visit www.exploresouthernhistory.com/oakcemetery. To learn more about the castle that Reynolds built in Cameron, Oklahoma, please visit www.exploresouthernhistory.com/castle1.