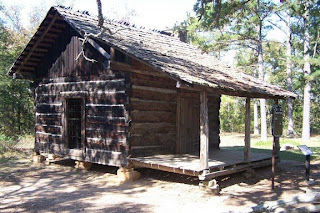 This unique old cabin at Petit Jean State Park in Arkansas dates from before the Civil War and serves as an example of the type of home lived in by many of the mountain families of the Natural State during the conflict.
Built in 1845 by John Walker, the cabin was one of only two homes on Petit Jean Mountain at the time it was constructed. In 1859 it became the home of Owen and Jane West, who lived in it through the Civil War years. In fact, they raised a family of nine children in the one-room home. Five of the children were born here.
Such families lived by farming in the rocky soil of the mountain, by raising livestock and hunting. The area was plagued by guerrilla bands during the Civil War, but the little family somehow managed to survive.
The cabin has survived through the years and today is one of the oldest standing homes in Arkansas. It is located within Petit Jean State Park, a beautiful and historic area located atop Petit Jean Mountain that is noted for its views, waterfalls, rock formations and rich history.
To learn more, please visit www.exploresouthernhistory.com/petitjean1.
Posted by Dale Cox at 12:58 AM 1 comment: 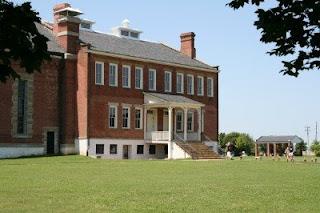 On July 29, 1864, even as Confederate troops were threatening the post, Union troops at Fort Smith executed four prisoners following a drum head trial that convicted them of "murder and the violation of the civilized rules of warfare."
Identified as A.J. Copeland, James H. Rowden, John Norwood and William Carey, they had been captured at the time of an alleged guerrilla attack that left eight Union soldiers dead in Northwest Arkansas. Although they were termed "bushwackers" by the Federals, at least three of the men (Copeland, Norwood and Carey) were members of regular Confederate units from Arkansas.
The following is excerpted from the August 6, 1864, issue of the Fort Smith New Era, a Unionist newspaper:
...The Judge Advocate of the District, Lieut. Whicher, then read to them the charges and findings of the military commission, after which the condemned kneeled down with the chaplains, and Rev. Mr. Stringer offered a short an appropriate prayer. At the conclusion of it the officers and others about the condemned shook hands with them and, bidding them a final farewell, retired, except the Judge Advocate, who remained till their eyes were bandaged and hands tied. By this time all of the unfortunate men showed signs of mental distress. Carey and Copeland prayed audibly and with great force. Norwood started a hymn, and was still singing, in a low voice, when the death volley sent his soul to eternity....
The execution took place on what was then the south side of Fort Smith, on the hill near where Sparks Hospital stands today. The incident is one of the episodes described in my 2008 book, The Battle of Massard Prairie: The 1864 Confederate Attacks on Fort Smith, Arkansas now available at www.amazon.com.
Posted by Dale Cox at 11:30 PM No comments: 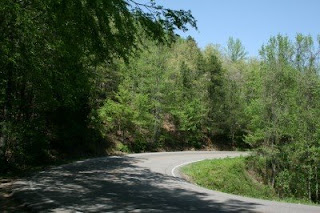 This 19 mile scenic highway passes through the Ozark National Forest in western Arkansas and provides an outstanding chance to see the mountain country of the Ozarks as it appeared to Union and Confederate soldiers that passed along the same route.
Call the Pig Trail because it has long been popular with fans of the University of Arkansas Razorbacks as they travel to and from games in Fayetteville, the scenic highway follows a route that has been used since the earliest days of settlement in Arkansas.
Brigadier General W.L. Cabell passed along this route with 900 men in 1863 on an expedition that ended at the Battle of Fayetteville. The road was used throughout the war by both regular forces and the guerrilla bands that hid deep in the mountains and emerged to strike at both regular forces and citizens holding viewpoints opposite their own.
Today the Pig Trail is one of the most beautiful roadways in Arkansas. It winds through picturesque mountain valleys and passes waterfalls, running streams, rock formations and the rolling hills of the Ozarks. To learn more, please visit www.exploresouthernhistory.com/pigtrail.
Posted by Dale Cox at 4:02 PM No comments: 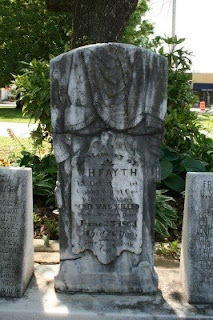 This monument on the grounds of the Franklin County Courthouse in the beautiful little city of Ozark, Arkansas, honors Lt. Col. William H. Fayth of the 4th Arkansas Cavalry.
According to the stone, Fayth was killed four miles north of Ozark on June 23, 1864. He was 26 years old.
I have not been able to find information on this specific incident, so if anyone has anything I would appreciate you posting a comment and letting me know.
Col. Fayth was a hard fighting officer who had served with distinction at the Battle of Marks Mill and elsewhere during the Red River Campaign earlier in the year. His death took place as Confederate cavalry forces were sweeping north across the Natural State.
Ozark was then a small but important community on the Arkansas River. A key road led from the town up through the Ozarks to Fayetteville and was often used by the troops of both armies.
You can learn more about Ozark at www.exploresouthernhistory.com/ozark.
Posted by Dale Cox at 8:34 PM No comments: