The Seizure of the Arkansas Cannon in 1861 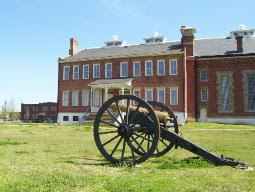 On April 17, 1861, a mob of citizens stormed aboard two steamboats tied up on the waterfront at Cincinnati, Ohio. The vessels were the Glendale and the Ohio No. 3. On board they carried a massive shipment of armament and supplies including field guns, similar to the one shown here that is on display at Fort Smith National Historic Site.

The 23 large boxes of supplies were being shipped from New York to Arkansas to fill an order placed in February of 1863 by Governor Henry Rector. Although Arkansas had not yet seceded from the Union and would not do so until May, the governor and other key leaders of the state were doing their best to prepare for the war that they felt would unavoidably reach Arkansas. A large shipment of miltiary supplies was contracted from a firm in New York for delivery as soon as possible.

The shipment aboard the steamboats included artillery carriages, ammunition, arms and field guns. There was also a large number of training manuals for use in drilling the state's raw militia.

By the arms and other supplies made their way to Baltimore and across the Baltimore & Ohio Railroad to the Ohio River, the North was up in arms over the Confederate bombardment and capture of Fort Sumter in Charleston Harbor. A mob stormed aboard the steamboats and seized all of the military materials, which included only part of the the total order.

The shipment was soon seized by the U.S. Marshal at Cincinnati persuant to the orders of the U.S. District Attorney there. This led to a court battle over the true ownership of the cannon and other material. It ultimately was ordered to be returned to the New York firm that had shipped it. The guns were provided to New York artillery units and went on to serve against Confederate forces during the war.

To read a full 1861 account of this unusual episode, please visit www.exploresouthernhistory.com/arkansascannon.
Posted by Dale Cox at 2:47 PM No comments:

The following report from Fayetteville appeared in newspapers across the North during late January and early February of 1863. I found it interesting because it speaks well to the divided nature of the war in Northwest Arkansas. The rally took place shortly after the Battle of Prairie Grove and the successful Union raid across the Boston Mountains to van Buren and indicates a strong swing of public opinion in favor of the Union in Fayetteville. Most of the pro-secession citizens had fled the city by this point and were living as refugees elsewhere.

Union Demonstration at Fayetteville, Arkansas.
Fayetteville, Ark., Jan. 25,
An enthusiastic Union demonstration occurred here yesterday. Over 1,000 loyal citizens of Arkansas were present. Speeches were made by Dr. Johnson, a prominent Union refugee: Colonel Bishop, of the 1st Arkansas Cavalry, and others. Fifteen Home Guard companies were organized and wish to be accounted as Arkansas militia. Hundreds of citizens signed a petition to order an election of member of Congress from this State. All citizens having arms in their possession have given them up, to be used for the defence of their homes.

I'll be posting additional transcripts of reports from Fayetteville over the coming days so be sure to check back. You can also learn about the battlefields and historic sites in and around the beautiful Northwest Arkansas city by visiting www.exploresouthernhistory.com/fayetteville.
Posted by Dale Cox at 1:14 PM No comments: