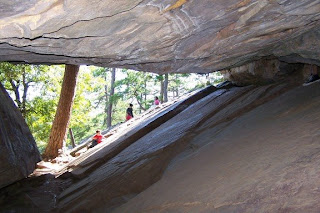 The cave seen in this photograph is not actually in Arkansas, but does have a close connection to the state's post-Civil War history.
This is Robbers Cave, the focal point of a state park near Wilburton, Oklahoma (about 45 minutes southwest of Fort Smith).
According to local legend, the cave and surrounding rock formations became a hideout in the years following the Civil War for a number of the most notorious outlaws on the western frontier, including Jesse James and Belle Starr. Many of these outlaw groups began as irregular or guerilla bands during the war. When the Civil war came to an "official" end in 1865, they continued to strike at targets of opportunity. The James-Younger Gang was involved in a number of incidents around Arkansas and it is certainly possible that they hid out once or twice around Robbers Cave.
To read more about this fascinating Oklahoma state park that is an easy drive from much of Western Arkansas, please visit www.exploresouthernhistory.com and look for the "Robbers Cave State Park" heading on the home page.
Posted by Dale Cox at 1:45 PM