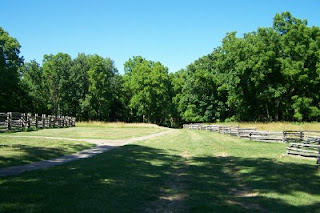 This photograph was taken from the bed of the old Telegraph Road in front of Elkhorn Tavern at Pea Ridge National Military Park.
In conjunction with the attack at Leetown, Confederate General Earl Van Dorn planned to emerge from the woods and ravines here and advance up the Telegraph Road to strike the Union supply trains that were concentrated in the fields near the tavern. When the battle began, this was the rear of the Union army, but it soon became the front.
When couriers brought news to Union General Curtis that Confederate troops were advancing on this point, he placed Colonel Eugene Carr in command of Colonel Grenville Dodge's Brigade and sent him to investigate. Carr promised to drive out the Southern troops in less than one hour as he headed north up Telegraph Road.
By the time he reached this point, Carr realized that the Confederates were approaching in force. He spread his men into line on each side of the road and placed his artillery in the clearing where it control the road. He was reinforced by his second brigade and more cannon at around noon.
Both sides were advancing and collided in the trees visible in this picture. The ground there was broken and filled with rocky ravines. The weather was cold at clouds of smoke, "the fog of war," soon filled the hollows and so obscured the scene that neither side could see the other and the men fought by firing at the flashes from the barrels of the other side's muskets.
General Sterling Price and his Missourians battled fiercely against Carr and his men. Although the Confederates outnumbered the Federals by more than 300% in men and 700% in artillery, the Union troops threw back attack after attack in bloody, savage fighting. For six hours the battle raged back and forth here until Price was finally able to break Carr's left flank and drive the Federals back.
Now isolated, the men of the Federal right flank (commanded by Col. Dodge) dug in and held on instead of falling back. They piled fence rails and logs and continued to drive back Confederate attacks. Some of the fighting was literally muzzle to muzzle. Gen. Price finally ordered a charge against the full length of the line. The Union troops by now were running low on ammunition and Dodge had no choice but to fall back.
The fight around Elkhorn Tavern was one of the most intense and bloody stand-up fights of the Civil War. The ground is now preserved at the national park and can be viewed from your car, but the best way to see it is to get out and walk.
Our series will continue, but until then you can read more by visiting www.exploresouthernhistory.com/pearidgeindex.
Posted by Dale Cox at 4:59 PM