The Battle of Cane Hill, Arkansas 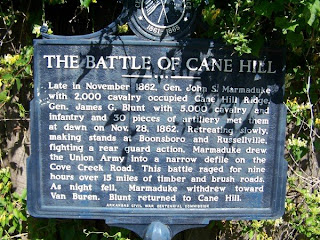 This is part one of a new series on the Battle of Cane Hill, Arkansas. Over the next several days, we will explore the history of this important engagement and look at some sites associated with the battle as they appear today.

The Battle of Cane Hill is often treated by historians as a preliminary episode of the Battle of Prairie Grove. While this is technically true, it was also a significant encounter in its on right that involved thousands of troops and dozens of pieces of artillery.

The battle took place when Union General James G. Blunt attacked the Cane Hill (sometimes spelled "Canehill") settlements on the morning of November 28, 1862. The community was held by around 2,000 Confederates under General John S. Marmaduke.

Blunt's men emerged from the hills and ravines north of Cane Hill at daybreak and quickly engaged Marmaduke's men in a battle that would continue for the rest of the day. Over 9,000 men took part in the fight, that raged over 15 miles of mountain country.

Watch for our next post as we begin to explore the history of this important battle. Until then, you can read more by visiting www.exploresouthernhistory.com/ARCaneHill
Posted by Dale Cox at 1:40 PM