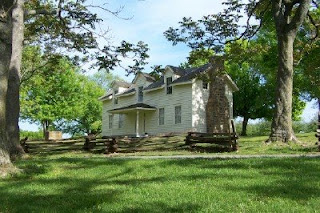 The Prairie Grove Battlefield in Washington County, site of one of the bloodiest battles of the Civil War west of the Mississippi, is facing danger from ongoing development in the area.
The Civil War Preservation Trust has labeled Prairie Grove as one of the Ten Most Endangered Civil War Battlefields. Although state officials, who have done a tremendous job in expanding and developing the Prairie Grove Battlefield State Park, disagree to some extent with the designation, the CWPT made its decision based on continuing residential development in areas of the battlefield.
The State of Arkansas now owns and preserves 838 acres of the battlefield and have turned it into one of America's premier preserved battlefield sites. Another 2,000+ acres remain in private hands.
Posted by Dale Cox at 11:18 AM