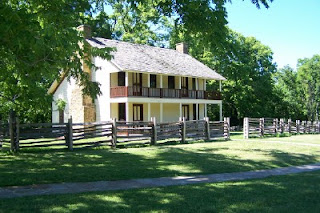 One of the key landmarks of the Battle of Pea Ridge was Elkhorn Tavern. In fact, the engagement is sometimes called the Battle of Elkhorn Tavern, Arkansas.
Elkhorn Tavern faced the old telegraph road and it was up this road that the second major Confederate attack advanced on March 7, 1862.
The original tavern was built in 1836 and was purchased in 1855 by Jesse and Polly Cox. The Cox family made a number of improvements to the structure and were living here at the time of the battle. Polly took shelter in the cellar during the Battle of Pea Ridge, along with her son, Joseph, his wife Lucinda, and their two young children.
Amazingly, although it was hit by cannon fire several times and fighting raged through yards, Elkhorn Tavern (so named because of a large set of Elk antlers displayed on the roof) survived the battle. The original structure was burned by Confederate guerillas one year later. The current tavern building was built by Joseph Cox after the war on the site of the original. It bears a striking resemblance to the tavern that stood here during the battle.
In our next post, we will look at the role played by Elkhorn Tavern in the Battle of Pea Ridge. Until then, you can learn more about the battle by visiting www.exploresouthernhistory.com/pearidgeindex.
Posted by Dale Cox at 1:35 PM