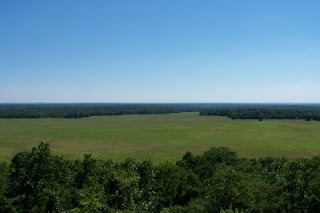 Continuing our series on the Battle of Pea Ridge, Arkansas, this view was taken from the East Overlook on the tour road at Pea Ridge National Military Park. It provides a wide view of the battlefiled.
Little Sugar Creek, where the Union army was positioned prior to the battle, is hidden behind the trees in the distance toward the horizon. The Confederates attacked in two locations, trying to strike the Federal flank and rear at the same time.
The first attack, against Union troops around the hamlet of Leetown, was in the woods and fields in the distant right of this photograph and further west. The other attack, launched up the Telegraph Road against Confederate troops around Elkhorn Tavern, came up just to the left of this photograph. The vast field seen here was occupied by the Union army during the late afternoon and evening of March 7, 1862 and the morning of March 8th saw the blueclad soldiers arrayed in massive ranks across the open ground.
Our tour of the Pea Ridge Battlefield will continue in our next post. Until then, you can learn more by visiting www.exploresouthernhistory.com/pearidgeindex.
Posted by Dale Cox at 12:16 AM