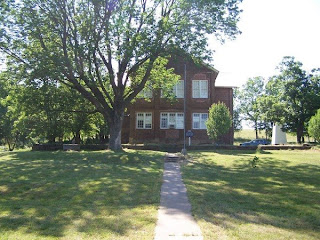 This photograph shows the historic Cane Hill College building. Although the surviving structure is of post-Civil War construction, the college was an important landmark of the community in 1862 and had been for more than thirty years.
The presence of a thriving college on the eve of the Civil War is just one of the indications that Cane Hill (sometime spelled Canehill) was a prosperous antebellum community. This was also noted by Confederate Major General Thomas C. Hindman:
Cane Hill is a ridge of perhaps 8 miles length and 5 miles width, in the southwest part of Washington County, Arkansas, just beyond the north base of the Boston Mountains. Three villages are built upon it (Russellville, Boonsborough, and Newburg), which almost blend with each other, covering a distance, as the road to Fayetteville runs, of 3 or 5 miles….
The pre-war economic prosperity of the community had made it a focus for the transportation network of southern Washington County. It was the point at which several key roads united after crossing the Boston Mountains. Anticipating a planned movement of his army up from the Arkansas River valley, Gen. Hindman sent a cavalry force of 2,000 men under Brigadier General John S. Marmaduke to occupy Cane Hill.
Marmaduke moved up in late November of 1862 and positioned his brigades camps stretching along the Cane Hill ridge. Although they comprised only a small part of Marmaduke's force, the presence of Captain William C. Quantrill's guerillas at Cane Hill is an interesting footnote to the battle. This was the organization that produced the notorious post-war outlaws Jesse James, Frank James and Cole Younger. Jesse was not present, but Frank and Cole may have been.
Marmaduke's pickets skirmished with Federal scouts in the vicinity on November 25, 1862, and all signs soon pointed to a looming battle.
Our series on the Battle of Cane Hill, Arkansas will continue. Until then, you can read more by visiting www.exploresouthernhistory.com/ArCaneHill.
Posted by Dale Cox at 9:47 PM

How much of the battle was actually fought in the town that now stands of Cane Hill?

A great deal of it was fought there. The current town of Cane Hill was in existence at the time and the fighting began at the northern edge of the modern community and passed completely through it.