The Battle of Pea Ridge, Arkansas 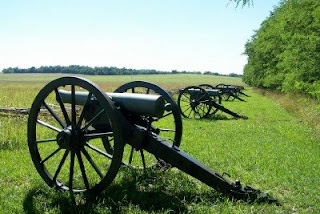 This week marks the 148th anniversary of the Battle of Pea Ridge, Arkansas. This massive engagement was found across thousands of acres of beautiful Ozark Plateau countryside in Northwest Arkansas on March 7-8, 1865.
Also called the Battle of Elkhorn Tavern, the Battle of Pea Ridge was one of the largest battles ever fought west of the Mississippi River and was also one of the largest battles of the first year of the Civil War. The site today is preserved at Pea Ridge National Military Park, an outstanding national park area in Benton County, Arkansas.
Beginning tomorrow, we will begin a multi-part series on the Battle of Pea Ridge. We will look at the strategy and tactics of the battle and share photographs of the battlefield as it appears today. Until then, if you would like to read more, please visit www.exploresouthernhistory.com/pearidgeindex.
Posted by Dale Cox at 10:20 AM