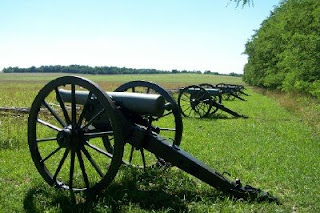 By the end of the day on March 7, 1862, the Confederates under Gen. Price had pushed past Elkhorn Tavern. They followed the retreating Federals and took up positions south of the tavern looking out onto the fields across which their enemy was reforming.

Although they had been victorious on their sector of the battlefield, the Confederates were exhausted. Ammunition and other supplies were running short, largely because Gen. Van Dorn had pushed his army forward to Pea Ridge at such a rate that his supply trains were unable to keep up.

Federal troops, meanwhile, achieved a dramatic reversal of front that continues to be studied by military students to this day. Curtis turned his entire army around and during the night of March 7 formed his troops facing the Confederates.

Dawn broke on the morning of March 8, 1862, the battered Confederates found themselves facing a fully arrayed and fresh Union army. No supplies had yet come up and most of the Southern troops who had fought on the Leetown sector of the battlefield had not reached Elkhorn by the time the battle resumed.

Bold to a fault, Gen. Van Dorn formed three of his batteries on either side of Telegraph Road and began a fierce artillery duel with the Federal batteries facing him. The firing started at 8 a.m., opening a second day of fighting.

The tide of the Battle of Pea Ridge had turned.

Our series on Pea Ridge will continue in our next posting. Until then, you can read more by visiting www.exploresouthernhistory.com/pearidgeindex.