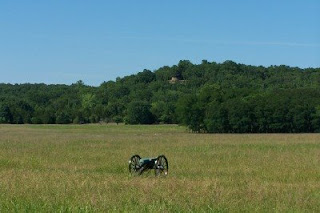 When the artillery barrages opened the second day of the Battle of Pea Ridge on the morning of March 8, 1862, Union forces moved 21 cannon into position in Cox's Field facing the Confederate lines. Another six cannon were placed in a second field across Telegraph Road and the results were decisive.
Short on ammunition, the Confederates could not respond effectively to the Union artillery fire. In addition, Confederate troops positioned in the rocks of the hillsides (seen in the distance here) were decimated when the exploding shells shattered rocks and trees, sending splinters of iron, wood and rock showering through the men.
At 10 a.m., with his lines of infantry formed in the open and ready to advance, General Curtis gave the order and the left flank troops of Col. Osterhaus and Gen. Alexander Asboth moved forward. It was a spectacular site, with thousands of Union troops moving in formation across the open fields against the battered and exhausted Confederates.
The Confederate right gave way under the pressure of the advance and Generals Van Dorn and Price led these men away via the Huntsville Road. Half the army, however, was left on the field with no one in command. Seeing the Southern troops begin to retreat, Curtis ordered forward his entire army and swept the Confederates from the field. It was a dramatic defeat for Van Dorn and forever doomed his reputation among the troops from Arkansas and Missouri.
The Federals rushed to try to run down or cut off as many of the divided Confederates as they could, with General Curtis reportedly riding up and down his lines shouting "Victory! Victory!" to the cheers of his men.
What Curtis achieved at Pea Ridge clearly indicates he was one of the finest generals of the war, although he had few opportunities after the battle to demonstrate his capabilities. Not only did he save Missouri for the Union, he defeated a much larger Confederate army, achieved a complete reversal of front while in battle and demonstrated a sound strategic and tactical mind.
Van Dorn would fight again in Mississippi (and be beaten again at Corinth), but eventually fell not in battle, but to the gun of the outraged husband of a woman he fancied.
Although casualties from the battle are difficult to count with complete accuracy, it was one of bloodiest battles of the first year of the war. Curtis reported losing 203 killed, 150 mortally wounded, 830 wounded and 201 missing in action (a total of 1,384). Confederate losses were probably around 2,000 men, 500 of whom were captured on the battlefield.
The battlefield is now preserved as Pea Ridge National Military Park, located in Benton County, Arkansas. Established by Congress in 1956 and dedicated in 1963, the park is one of the best preserved Civil War battlefields in the country. Pea Ridge Battlefield is open to the public daily and facilities include a visitor center, tour road through key areas of the battlefield, Elkhorn Tavern and 4,300 acres of historic landscape.
To read more, please visit www.exploresouthernhistory.com/pearidgeindex.