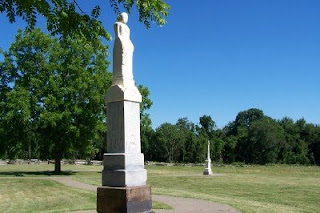 The battlefield at Pea Ridge National Military Park is unique among America's major Civil War sites in that the hallowed ground is very uncluttered and open. Although there are interpretive panels and cannon, the park gives visitors a chance to see unobstructed vistas of the battlefield. As a result, Pea Ridge is one of the most beautiful preserved battlefields in the country.
While the beautifully preserved park serves as a permanent memorial to the men who fought and died here, visitors can also see two historic monuments that were placed on the field years ago near Elkhorn Tavern. The one seen here in the distance honors the Confederate generals who died at the Battle of Pea Ridge. It was paid for by the citizens of Benton County, Arkansas and erected on the battlefield in 1887.
The second monument, closer to the camera, is among the most unique to be found on any American battlefield. It was erected in 1889 by the veterans of both armies and symbolizes that they were once again reunited. It was one of the first monuments of its kind in the country, erected by soldiers who wanted the world to know that they were once again friends and countrymen, despite the hardships of the war they had fought against each other. It stands as an eternal reminder of the peace and unity that the soldiers themselves wanted the world to remember.
Our series on the Battle of Pea Ridge will continue. Until the next posting, you can read more by visiting www.exploresouthernhistory.com/pearidgeindex.
Posted by Dale Cox at 11:56 AM