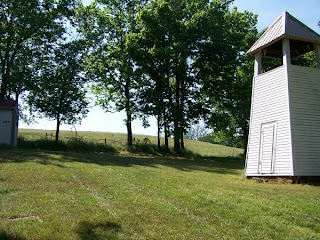 This is part four of a series on the Battle of Cane Hill, Arkansas. To read the previous posts first, please scroll down the page.
For nearly an hour the Union artillery exchanged fire with Confederate cannon posted on the heights near Cane Hill College. The Confederate advance, under "Fighting Jo" Shelby, had been surprised by the sudden appearance of the Federal troops, even though - as Shelby himself admitted - they had known for 18 hours that the enemy was coming.
Seriously outnumbered by the unfolding Union line of battle, Shelby held his position on the northern edge of town for as long as he could, then withdrew in good order to a second position along a ridge about three quarters of a mile south of his original line. The fighting withdrawal took the soldiers of both sides past the college grounds, which are now open to the public.
Reaching his new position, Shelby found the rest of Marmaduke's Confederates already in line and waiting for him. Falling into line with their reinforcements, the Confederates looked back and beheld a sight they would never forget:
Here the naked eye could see General Blunt’s columns of cavalry and infantry pouring over the hills in our front, and advancing slowly and cautiously to the attack. It was a splendid sight – flaunting banners, serried ranks, as the long lines came gleaming on….
Our series will continue. Until the next post, you can read more by visiting www.exploresouthernhistory.com and looking for the "Battle of Cane Hill" link under the Battlefields and Forts heading (on the left column of the home page).
Posted by Dale Cox at 5:23 AM