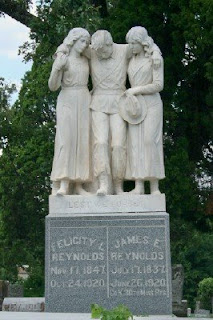 One of the most historic cemeteries in the United States can be found in Fort Smith.
Oak Cemetery was established at about the time Fort Smith was founded and contains the graves of hundreds of individuals that played critical roles in the history of the Western Frontier. Among these are soldiers, lawmen, a governor, Old West outlaws and even a Confederate spy.
Scattered through the cemetery can be found the graves of at least 122 Confederate soldiers, all of whom died during the decades following the war. Listed among them is Sarah Ish Parke, a female Confederate spy, courier and smuggler.
The cemetery also contains the graves of 28 men executed by order of another Civil War veteran, Judge Isaac C. Parker. Remembered as the "Hanging Judge" of Fort Smith, Judge Parker served on the bench for the Western District of Arkansas during the decades following the war. He and his deputy marshals brought law and order to the wild and violent frontier. A Union veteran who served in the 61st Missouri Emergency Regiment, Parker hanged more convicted men than any Federal judge in American history. Among the burials at Oak Cemetery are 28 men, all convicted of murder, who met their fates on the gallows at Fort Smith.
Also buried at Oak Cemetery are more than 100 deputies, guards, court officials and posse members who served under Judge Parker.
To learn more, please visit www.exploresouthernhistory.com/oakcemetery.
Posted by Dale Cox at 7:31 PM