The Death of Ben McCulloch at Pea Ridge 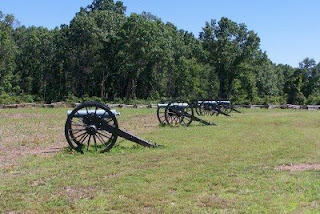 This photograph shows a row of Confederate cannon on the Leetown section of the Pea Ridge battlefield.
This was the section of the field where the Battle of Pea Ridge began, as General Ben McCulloch of Texas led thousands of men in a planned attack against the right rear of the Union lines. The other half of the Confederate army, led by General Van Dorn in person and commanded by General Sterling Price, was moving up around a mountain to sweep in directly behind the Union forces via the Telegraph Road and Elkhorn Tavern.
McCulloch was a famed figure on the frontier. Born in Tennessee in 1811, he was part of the group that was to accompany David Crockett to Texas in 1835 but came down with the measles and so was late linking up with Crockett and the other men. As a result, he missed being 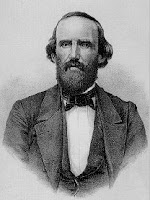 killed at the Alamo with Crockett, Travis and the other Texas heroes.
Outraged, McCulloch joined Sam Houston's army and commanded one of the famed "Twin Sisters" cannon at the Battle of San Jacinto. He fought in other skirmishes and battles against Mexican forces and also served under Major David E. Twiggs during the Mexican War.
During the years leading up to the Civil War, McCulloch served as a scout, U.S. Marshal, Texas Ranger and served as one of the peace commissioners sent to negotiate a truce with Brigham Young and his followers in Utah during the 1858 "Mormon War."
Commissioned as a colonel by President Jefferson Davis in 1861, McCulloch had accepted the surrender of U.S. military posts in Texas from his former commander, David Twiggs. He was then promoted to brigadier general and fought with distinction at the Battle of Wilson's Creek in Missouri.
He achieved initial success at Pea Ridge, overrunning a Union battery and driving toward the rear of the right flank of the main Union line. As he moved forward for a closer look at Union positions, however, he was shot from the saddle by a Union sharpshooter and died instantly. Reports indicate that, never fond of military uniforms, McCulloch had gone into battle wearing a black velvet suit.
His second-in-command, General James McQueen, died just fifteen minutes later when he was killed in a charge launched to recover McCulloch's body. The Confederate attack rapidly fell apart, perhaps ending the greatest possibility of success for Van Dorn's army in the Battle of Pea Ridge.
General McCulloch was initially buried on the battlefield but now rests at the University of Texas-Austin.
I'll post more about Pea Ridge tomorrow, but until then you can read more by visiting www.exploresouthernhistory.com/pearidgeindex.
Posted by Dale Cox at 4:15 PM