Native Americans at the Battle of Pea Ridge 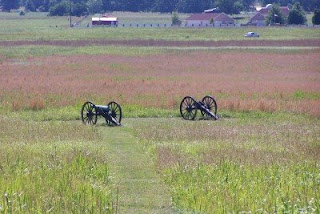 The artillery position shown here is visible beyond the interpretive stop at Pea Ridge battlefield that explains the role of General Albert Pike's Indian Brigade during the battle.
Ordered by Van Dorn to bring as many men as possible to join the attack on Curtis's army and planned invasion of Missouri, Pike arrived from the Indian Territory (today's Oklahoma) with a large force of warriors that curiously included men who favored both the Confederacy and the Union. It was an oddity of the Battle of Pea Ridge that both Unionists and Secessionists fought on the side of the Confederacy under Pike's command.
While the actions of the Indian Brigade did not constitute a major part of the action, they did manage to overrun a Union artillery position and also successfully ambushed two companies of Iowa cavalry during the fighting. When the Confederate attack in the Leetown area faltered following the deaths of Generals Ben McCulloch and James McIntosh, the Native American soldiers joined the other Confederates on this section of the field in falling back.
Union soldiers combing the woods and fields for traces of fallen comrades came across the site where Pike's Indians had ambushed the Iowa cavalry companies and were shocked by the scene. Eight of the Iowa soldiers had been scalped and another 17 had been mutilated. The incident prompted outrage in the Union ranks, but was not considered particularly unusual by the Confederates on the western frontier. Native Americans of many tribes believed they were hampering their enemy's passage into the next world through such rituals.
After the Battle of Pea Ridge, some of the members of the Indian Brigade went on to fight for the Union for the rest of the war, although most of the soldiers remained loyal to the Confederacy until the bitter end. Some of these men were still with General Stand Watie when he became the last Confederate general to lay down his arms in 1865.
I'll post more on some other points of interest on the battlefield in the next post. Until then, you can learn more by visiting www.exploresouthernhistory.com/pearidgeindex. This weekend marks the 147th anniversary of the battle.