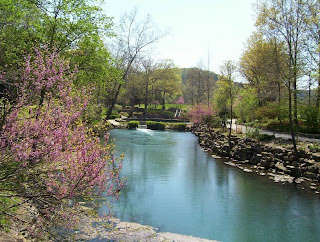 In yesterday's post I mentioned the destruction of numerous water-powered gristmills across the Ozarks region of Arkansas during the Civil War. Another site of a destroyed mill can be found at Blue Spring Heritage Center just outside of Eureka Springs.

Blue Spring was a noted landmark of 19th century Arkansas and had been a campsite on the Cherokee Trail of Trears. Early settlers built a mill here, using the powerful flow of the spring to turn the wheel. Like many similar facilities, the gristmill at Blue Spring was targeted during the war and went up in flames.
A few traces of the early pioneer industry can still be seen and interpretive signs on the grounds tell the story of the mill and its important role to the lives of the original settlers of the region. The grounds of the Blue Spring Heritage Center are noted as being among the most beautiful in the South. In addition to the magnificent natural spring and mountain setting of the park, there are magnificent planted gardens that will be coming into full bloom in early April.
Blue Spring Heritage Center is located 6 miles northwest of Eureka Springs off Highway 62. The park opens for the season on March 15. To learn more, please visit www.exploresouthernhistory.com/eureka3.
Posted by Dale Cox at 2:59 PM