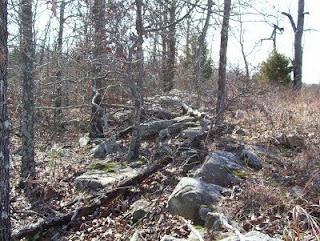 Over recent days I've posted about the movement of Union troops over the Boston Mountains from Northwest Arkansas and the attacks at Dripping Springs and Van Buren in Crawford County. When Fort Smith itself finally came under attack, however, the threat came not from the North but from the West.
The summer of 1863 found General James G. Blunt and the Army of the Frontier at Fort Gibson(temporarily called Fort Blunt) in what is now Oklahoma. On July 17th he had launched a preemptive strike against a Confederate army gathering to attack him, defeating General D.H. Cooper at the Battle of Honey Springs or Elk Creek.
By August, Blunt was moving east fort Fort Smith. General W. L. Cabell tried to hold him back but morale was bad and his force was rapidly disintegrating. Cabell had formed his men along the bank of the Poteau River just west of Fort Smith, but he knew the position was untenable. Rather than await the expected attack, he quietly withdrew during the night of August 31, 1863.
As the Federals advanced on the morning of September 1st, they found the Confederate positions abandoned. Moving forward, General Blunt ordered Colonel William F. Cloud to take the army's cavalry and pursue Cabell who was believed to be in full retreat to the South. Blunt, meanwhile, occupied Fort Smith.
Cloud pursued the Confederate army, skirmishing briefly with Southern cavalry at Jenny Lind, but then rode blindly into an ambush laid for him by Cabell at Devil's Backbone, a long ridge that stretched from near Greenwood, Arkansas, across the line into eastern Oklahoma.
From positions along the ridge, Cabell's men rose and opened fire on Cloud's approaching cavalry, inflicting casualties and sending the Federals scrambling for safety. Heavy fighting broke out and both sides brought artillery to bear, although most of the cannon fire went too high.
If you would like to learn more, check out the newly updated pages on the Battle of Devil's Backbone at www.exploresouthernhistory.com/devilsbackbone. The site includes photographs of the battlefield, an in depth account of the battle and both Union and Confederate reports.