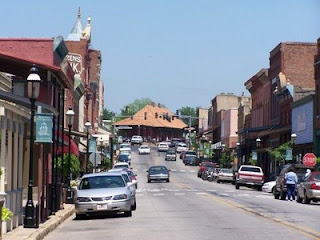 Fought on December 28, 1862, the Battle of Van Buren was an important skirmish that was the last real fight of the Prairie Grove Campaign.
Three weeks earlier, Union and Confederate forces had battled to a stalemate during the brutal fighting at Prairie Grove. Union generals James Blount and Francis Herron had considered pursuing General Thomas Hindman's battered Southern army back across the Boston Mountains, but winter weather intervened.
Then, three weeks after the Battle of Prairie Grove, they received incorrect reports that Hindman was being reinforced for another attack over the mountains. In reality, his army was rapidly disintegrating as he struggled to hold it together in camps around Van Buren and Fort Smith. Hoping to avoid another surprise, Blount and Herron set out from their camps in Northwest Arkansas on December 27, 1862.
Moving across the rough mountains, they struck Crump's regiment of Texas cavalry at Dripping Springs north of Van Buren on the morning of December 28th. Crump's men briefly resisted, then fell back on the road to Van Buren, skirmishing with the oncoming Federals as they went.
The troops reached Van Buren so fast that there was no time to warn the citizens of the coming battle. The people of the town were going about their daily business along the main street when they were stunned by the sight of soldiers on horseback storming down the street.
Crump's men boarded a ferry on the Van Buren waterfront and most managed to escape, despite artillery fire from the Union troops. Fighting then spread to various points along the Arkansas River as the Federals moved to capture steamboats that were trying to escape down the river. Two boats were forced to shore, looted and destroyed. Three others were fired by the Confederates themselves to save them from capture.
At about 2:30 in the afternoon, Confederate forces opened fire on Van Buren with a battery of artillery placed on the opposite side of the river. The Union troops responded with a battery of rifled guns positioned at Fairview Cemetery. The exchange lasted for some time and it was estimated that as many as 100 Confederate shells fell on the town, killing and wounding a few soldiers and civilians and also doing damage to some of the homes and other structures.
You can learn more about the Battle of Van Buren by visiting our new pages that are now online at www.exploresouthernhistory.com/vanburenbattle1. The link will take you to a complete site on the Battle of Van Buren that includes photographs, transcripts of official reports and a detailed history of the battle.
Posted by Dale Cox at 12:30 AM