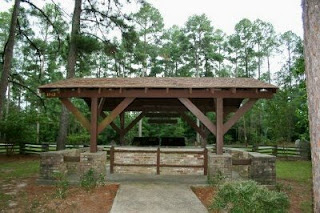 This is part three of a series of posts on the Battle of Poison Spring, Arkansas. To read the previous posts, please scroll down the page or check the Archives section.

The Battle of Poison Spring unfolded much better than either Marmaduke or Maxey could have hoped. The "L" shaped position taken by the Confederate forces (see map in previous post) gave them an immediate tactical advantage.
Colonel Williams formed his men into a line of battle facing Maxey's men, who were all but invisible in the woods and underbrush south of the road. In doing so, he allowed himself to be drawn into a trap exactly as Marmaduke had hoped. The Union colonel's report, in fact, describes an extremely confusion situation for the Federal soldiers even with the benefit of post-battle hindsight. It appeared to them that Confederates were coming from all directions and, in truth, they were.
As Williams was moving men back and forth and trying to make some sense of the situation, the Confederates suddenly opened on his lines with artillery. The Union commander reported that batteries fired on him from the front (Maxey's position) and his right flank (Marmaduke's position).
Simultaneous with the opening of artillery fire, the Confederates under Maxey advanced their line. Heavy fighting followed as the Union forces, anchored by the 1st Kansas Colored Volunteers, tried to hold off the motivated Confederate attackers. It did not take long for the 3 to 1 numerical superiority of the Southern forces to show.
Although the Union line was able to beat back attacks, Colonel Williams reported that this was achieved at great cost. He later reported that in short order half of his command had been either killed or wounded.
The attack by Maxey was designed to focus the attention of the Union troops and in this it achieved its goal spectacularly. When Marmaduke ordered forward his brigades against the Union right flank, the battle quickly turned into a debacle for the Federal forces. Initially fighting hard as they went, the Union troops began to retreat in the face of the Confederate attack on their flank. Realizing the critical moment was at hand, Maxey once again advanced his men as well.
Although Colonel Williams' tried to withdraw his men from the battlefield in order, the crushing attack prevented this effort. The retreat turned into a route and by the time it was over, the Confederates had pursued the scattered Union command for over two miles.
Union losses at Poison Spring were shocking. An estimated 204 Federal soldiers were reported killed or missing following the battle, while another 97 were listed as wounded. The exact number killed is somewhat difficult to determine. Williams claimed that a number of wounded soldiers from the 1st Kansas Colored Volunteers were murdered on the spot by Confederate forces. There is some confirmation of this in the writings of Southern participants, one of whom noted that killings were carried out by members of 1st and 2nd Choctaw regiments. The men of these units had a particular grudge against the soldiers of the 1st Kansas because of the harsh treatment dealt on homes and families in the Choctaw Nation by that regiment prior to the Red River Campaign. One eyewitness reported that the outraged warriors retaliated at Poison Spring and "did kill and scalp some."
General Marmaduke's report listed 100 wounded and 120 non-wounded Union soldiers as having been taken prisoner at Poison Spring, while he estimated the number of dead on the ground at an impossibly high 400-600. He also reported the capture of 195 wagons, 4 pieces of artillery and 1,200 mules while listing his own losses at 13 killed, 81 wounded and 1 missing.
I will have more on the Battle of Poison Spring in the next post. Until then, read more by visiting www.exploresouthernhistory.com/poisonspring.
Posted by Dale Cox at 2:31 AM