Prelude to the Battle of Poison Spring, Arkansas 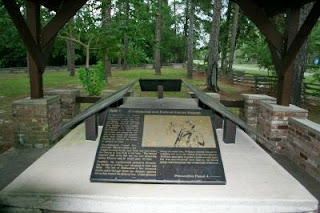 After he moved his forces into the fortifications of Camden on April 15, 1864, Union General Frederick Steele assessed his situation.
Faced with growing Confederate resistance and a severe shortage of supplies, Steele also heard rumors from local citizens that the Louisiana advance under General Nathaniel P. Banks had been badly beaten and was retreating. He decided that his best option was to keep his men under the cover of Camden's defenses until he could learn more of Banks' fate.
His first priority was to obtain food for his men. If he could not do so, the campaign would end in disaster do to starvation.
Learning that there was a large supply of corn stockpiled on farms about 20 miles west of Camden, Steele began assembling a force on April 16th to march out and retrieve it. With a total strength of 670 men, the bulk of the force was made up of the 1st Kansas Colored Volunteers. The 1st Kansas was a seasoned regiment that had fought extremely well at the Battle of Honey Springs, Oklahoma, the previous summer. The force was augmented by two pieces of field artillery.
Colonel James Williams was assigned to command the raid, which would leave Camden on the morning of the 17th. The soldiers assembled a train of 200 wagons, all of which they hoped to fill with confiscated corn.
Our look at the Red River Campaign will continue in the next post. Until then you can read more on the events surrounding the Battle of Poison Spring at www.exploresouthernhistory.com/poisonspring.
Posted by Dale Cox at 12:25 PM