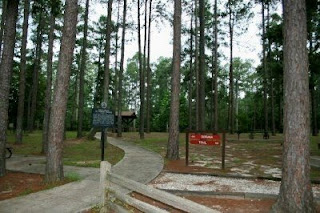 As Colonel James Williams and his force of Union raiders tried to make their way back to Camden on the morning of April 18, 1864, with nearly 200 wagons loaded down with confiscated corn and stolen goods, a Confederate force of roughly 3,600 men with 12 pieces of field artillery moved to intercept them.
Williams and his men were following the Washington-Camden road, which ran along the route of today's Arkansas Highway 76. Moving slowly due to their heavily laden wagons, the Federals approached a small water source known locally as Poison Spring at around 10 a.m. Their vanguard was met there by Confederate troops led by General John S. Marmaduke.
Marmaduke reacted boldly, driving back the forward elements of the Union column and seizing a ridge that would prove a critical position in the coming battle. The Washington-Camden Road led up and over this ridge, so Marmaduke positioned his force directly across it. Cabell's and Crawford's brigades of dismounted Confederate cavalry formed the main Southern line, with Greene's brigade (also dismounted) held in reserve. Marmaduke's personal escort was placed in advance of the main line to serve as skirmishers.
The main Confederate position was near the eastern edge of today's Poison Spring State Park, while the Union wagon train stretched down the road from roughly the area of the state park west to the vicinity of the Poison Spring Lookout Tower, a distance of nearly two miles. Virtually the entire battlefield is now preserved in either the state park or the adjoining state forest.
Just as the battle began, Marmaduke was reinforced by the arrival of his commanding officer, General S.B. Maxey, with additional men and artillery. Although Maxey was the senior officer on the field, he declined Marmaduke's offer to accept command because the latter general had already initiated the battle and was more familiar with the ground.
After a brief conference, it was decided that Marmaduke would hold his position astride the road, while Maxey would move off to the left (opposite the road from today's state park) and form his men at a right angle to the initial Confederate line. This resulted in an "L" shaped line with Marmaduke at the base and Maxey to the left.
The Confederate plan was for Maxey to engage the Union forces that were moving into position to protect their wagons and convince them that the main Confederate attack would come from the pine woods to the south of the road. Once the Federals deployed to meet this anticipated attack, Marmaduke would then storm forward with Crawford's and Cabell's brigades and overrun what he expected would be the right flank of the Union line.
To help you better visualize the positions of the troops, I will include a map in the next post. Until then, learn more by visiting www.exploresouthernhistory.com/poisonspring.
Posted by Dale Cox at 1:12 AM