The Red River Campaign in Arkansas 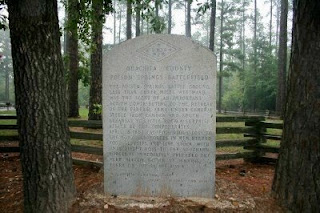 This month marks the 145th anniversary of the Union's disastrous Red River Campaign.
In Arkansas, the campaign resulted in a series of battles between Confederate forces and the Union army of General Frederick Steele. Although the Arkansas phase of the campaign is best noted for the Battles of Poison Spring, Marks Mill and Jenkins Ferry, there were a number of other encounters as well.
It was 145 years ago today, for example, that Steele faced General Sterling Price in a noisy but otherwise inconclusive battle at Prairie D'Ane, Arkansas. After considerable long range firing, Price withdrew his outnumbered army from the field without the Union forces detecting the movement.
Realizing that he was facing growing opposition and growing critically short on provisions and other supplies, Steele decided to temporarily halt his advance to Shreveport and took up positions behind the fortifications of Camden, Arkansas. The coming week would see one of the bloodiest fights of the campaign, the Battle of Poison Spring.
We will begin retracing the movements of the Red River Campaign in Arkansas over coming days, so be sure to check back in throughout the next couple of weeks for the latest updates.
Posted by Dale Cox at 1:50 PM