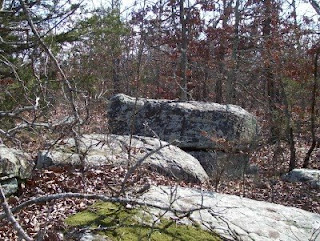 The Battle of Devil's Backbone ended in disaster for the Confederates.
When Cabell's men broke and ran from behind their stone defenses on the mountain, the South lost forever its chance to hold or retake Fort Smith. The strategic post and city passed into Federal hands and would remain in them for the rest of the war.
Much of the site of the battle today is on private property, so please respect the rights of local property owners. There is a growing sense of awareness of the importance of the battlefield. The Civil War Preservation Trust recently obtained an important tract through which the Confederate retreat took place.
A monument to the battle can be seen on nearby Highway 71 at the point where the highway intersects the Backbone just south of Greenwood.
For more on the history of the Battle of Devil's Backbone, Arkansas, please visit www.exploresouthernhistory.com/ArkansasCW5.
Posted by Dale Cox at 10:23 AM

Dale,
Thanks for the series. All the campaigns around Ft. Smith would make for a nice book. I am reminded of Ed Bearss's series of articles for AHQ.

Thank you. You are right, it really would. I don't know if you have read it, but Ed Bearrs also co-wrote a really good book on Fort Smith. It is more an overview of the entire history of the fort, but is well worth the read.

Dale,
I've only skimmed through the Civil War portion of that one. BTW, is the CW content from the Fort Smith histories by Odie Faulk and Fred Patton worthwhile?

They are worth the read. I haven't done a search to see if you've reviewed it yet, but the Henry Strong Diary edited by Tom Wing is a fascinating read. Tom now heads the Historical Interpretation Program at the University of Arkansas-Fort Smith and his footnotes alone are a great contribution to Fort Smith's Civil War history.

Oddly enough, I just received that book in the mail from the Butler Center this past weekend. I'd been eyeing it for a while.

By the way, your copy of the Massard Prairie book is on the way. Will started sending out review copies today, so you should have it by the weekend.