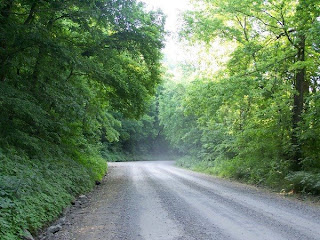 This is Cove Creek Road at the point where it emerges from the Boston Mountains in southern Washington County, Arkansas.
This road was a major transportation artery for both armies during the Civil War.
During the first week of December, 1862, the Confederate army of Gen. Thomas Hindman advanced up the Cove Creek Road in a march that would lead to the Battle of Prairie Grove. Hindman hoped to catch the Union forces of Generals James G. Blunt and Francis J. Herron divided and defeat them in detail. The effort failed and the Battle of Prairie Grove was a bloody tactical stalemate.
The Confederate force withdrew back down this road following the battle. Blunt and Herron followed later in the month, advancing by both the Cove Creek and Telegraph or "Wire" Roads. Their advance resulted in the late December battles of Dripping Springs and Van Buren.
For the rest of the war, the Cove Creek Road was an important connector between Van Buren and Fort Smith and the Northwest Arkansas counties of Washington and Benton. There were numerous small encounters along the road, many of them involving irregular or guerilla bands.
Large sections of the original road can still be followed today. A graded road passing through southern Washington and northern Crawford Counties, it is little changed from the days of the Civil War.
Posted by Dale Cox at 1:34 PM