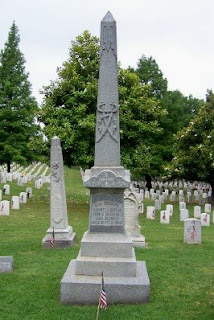 Continuing our Memorial Day look at Fort Smith National Cemetery in Arkansas, this is the monument to Brigadier General Richard C. Gatlin, C.S.A.
Gatlin was a major in the U.S. Army when Fort Smith was seized by the Arkansas State Militia in 1861. He was among the handful of U.S. soldiers at the post and was listed as a prisoner of war in the initial reports of the occupying force.
He subsequently resigned his commission, however, and soon became a soldier in the service of the Confederacy.
Volunteering his services to his native state of North Carolina, Gatlin served first as that state's adjutant general, but was soon commissioned as a colonel in the provisional army of the Confederacy. He was promoted to brigadier general in August of 1861 and assigned to command the coastal defenses of North Carolina.
His outnumbered forces were battered during Burnside's North Carolina campaign. Seriously ill, General Gatlin was relieved of duty in March of 1862. He resigned his commission due to his age later that year, although he continued to serve North Carolina as adjutant and inspector general.
After the war he returned to Arkansas where he operated a farm in Sebastian County and lived for a number of years in Fort Smith. He died at Mount Nebo, Arkansas in 1896 at age 87. He and his wife are both buried at Fort Smith National Cemetery.
Posted by Dale Cox at 12:57 PM