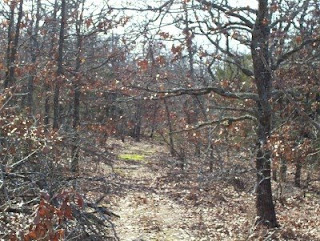 This view shows the trace of the old Jenny Lind Road at the point where it climbed up the steep slope of the Devil's Backbone near Greenwood, Arkansas.
The photograph was taken during winter, which explains the brown leaves and fairly open view of the otherwise heavily overgrown mountain.
The Confederates formed the first stage of their ambush just down the slope from this point at the bottom of the ridge. As the Federals arrived at Fort Smith on the morning of September 1, 1863, they sent forward a pursuing force under the command of Col. William F. Cloud of the 2nd Kansas Cavalry.
Cabell's Confederate cavalry skirmished with this oncoming force at Jenny Lind, a small community about midway between Fort Smith and the Devil's Backbone. As expected by the Southern general, his horsemen withdrew ahead of the Federals and drew them into the ambush at the mountain.
Colonel Cloud described the scene:
At 12 o’clock we came to their rear guard in ambush, whose deadly fire cut down Captain Lines and 10 or 12 of his command. I found a line of dismounted cavalry and howitzers and steadily drove their rear from their position, and up the mountain side, to within one-fourth of a mile of their line of battle, skillfully formed upon the summit of Backbone Mountain of the Poteau range. I here brought my whole force into action, and for three hours the battle raged with variable violence.
The Captain Lines mentioned in the report was Captain Edward C.D. Lines of Company C, 2nd Kansas cavalry. According to the regimental surgeon, he was shot through the "bowels and liver."
The Confederate ambush stunned the Union advance and a sharp encounter erupted along the lower slopes of the mountain. Cabell's staggered lines slowly withdrew up the ridge as the Federals attacked, falling back on the main line that was formed behind stone breastworks on the top of the mountain.
Our series on the Battle of Devil's Backbone will continue. Until the next post, you can read more by visiting www.exploresouthernhistory.com/ArkansasCW5.
Posted by Dale Cox at 11:13 PM