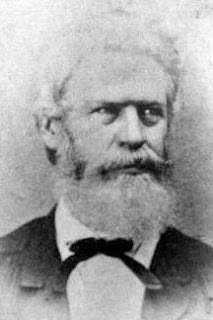 This post concludes a special series on the Battle of Massard Prairie, Arkansas. To read the previous posts, please consult the Archives section.
The Battle of Massard Prairie was an overwhelming Confederate victory. In his after action report, General Cooper (seen here) described it as "a gallant and dashing affair."
The Confederates rounded up their prisoners and collected all the weapons and supplies they could carry before setting fire to the Union camp and starting back over the ridge at the south side of the prairie. As they were leaving, Union reinforcements appeared on the opposite side of Massard Prairie. The Federals followed them, but did not attempt a serious attack and turned back before they could be drawn into the planned ambush at Devil's Backbone.
Union losses in the attack were 13 killed, 14 wounded and 124 captured. Confederate losses were 12 killed, 26 wounded and 1 missing. The Union dead were buried at what is now Fort Smith National Cemetery. The Confederate dead were buried in a trench on the battlefield. One eyewitness reported that the Southern dead were scalped before they were buried.
Massard Prairie Battlefield Park now preserves the site of much of the camp of the 6th Kansas Cavalry and the scene of some of the heaviest fighting of the battle. Located near the intersection of Morgan and Red Pine off Geren Road in Fort Smith, the park features a walking trail, monument, memorial flagstaff and small signs pointing out the locations of various features of the camp.
To learn more about the Battle of Massard Prairie, please visit www.exploresouthernhistory.com/massardprairie. Also please consider my new book, The Battle of Massard Prairie, available now by following the same link.
Posted by Dale Cox at 1:40 PM