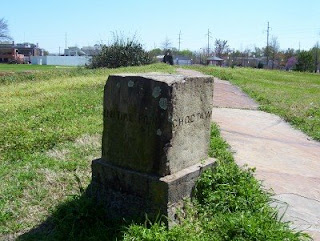 This is part five of a continuing series on the Battle of Massard Prairie, Arkansas. To read the previous posts, please scroll down or check the archive section.
It is a little known fact today that in 1864, Fort Smith stood at the very edge of the United States. Directly across the river from the fort was what during the 19th century was called the "Indian Territory," a large area of land set aside for the displaced members of the Choctaw, Chickasaw, Creek, Cherokee and Seminole Nations, as well as a number of other peoples forced into the region.
The photograph above shows a reconstruction of the survey marker dividing Arkansas from the Choctaw Nation. The flat stone area next to it marks the site of the original wall of Fort Smith. Both can be seen at Fort Smith National Historic Site.
A large force of Choctaw Confederates took part in the Battle of Massard Prairie, forming the main force of the right or eastern-most wing of Gano's attack. As the general and his Texans struck the west side of the Union camp at Massard Prairie, the Choctaw horsemen swept around the grove to strike the east side of the camp.
The result was a well-conducted envelopment of the 6th Kansas Cavalry. The Union battleline soon found itself assaulted on both flanks and under fire from a third, smaller column that Gano send through the grove to attack the center. The Union left flank, facing heavy attack from the Choctaw column, was the first to give way. Although acting-Major Judson, commanding the 6th Kansas, supposedly gave orders for his entire battalion to retreat, the orders were not conveyed up and down the line. As a result, Judson fell back with the two companies on the left, leaving the two right companies to face Gano's full attack.
Our series will continue. Until the next post, you can read more by visiting www.exploresouthernhistory.com/massardprairie. Also please consider my new book, The Battle of Massard Prairie, now available by following the same link. Proceeds from the book support historic preservation efforts in Arkansas, including the new Cane Hill Driving Tour project.
Posted by Dale Cox at 12:07 AM

I just received a copy of your new Massard Prairie book in the mail and I've been following along with the blog posts as well. I look forward to reading it!