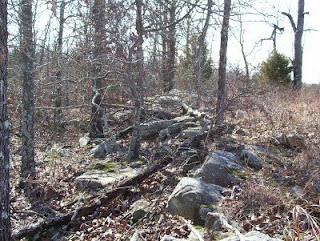 This photograph shows a surviving section of the Confederate main line at the top of Devil's Backbone.
General Cabell positioned his main force along the natural rocky spine of the mountain and the men piled extra rocks on top of the natural formation to create stone breastworks. This section of breastworks is just east of the old Waldron Road trace and was held by the right flank of the Confederate line.
The position was extremely strong and even though the Federals pushed back the Southern advanced lines from the lower slopes of the mountain, they were unable to dislodge Cabell and his men from their breastworks.
The fighting was intense. Confederate artillery, positioned at the center of the line scene here, opened on the Federals each time they exposed themselves. The Federals brought up the guns of Rabb's battery and for several hours the two sides shelled each other. Artifact discoveries at the battlefield indicate verify the reports of both sides, however, that they cannon fire was largely ineffective. The Confederate fire generally went over the heads of the Union soldiers on the lower slopes of hte mountain. Union fire, meanwhile, more often than not sailed over the top of the ridge and landed in the fields beyond. As a result, casualties were low.
This series will continue. If you would like to read more about the Battle of Devil's Backbone before the next post, please visit www.exploresouthernhistory.com/ArkansasCW5.
Posted by Dale Cox at 2:50 PM