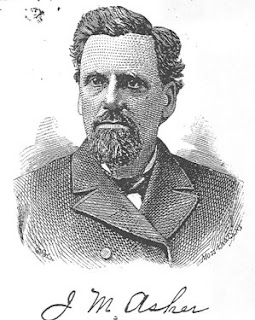 This is part six of a series on the Battle of Massard Prairie, Arkansas. To read the previous posts first, please scroll down the page or consult the Archives section.
The breaking of the Union line resulted in disaster for the men of the 6th Kansas Cavalry, many of whom were killed, wounded or captured. The man shown here, James Asher, was a cavalrymen in the 6th Kansas at the time of the battle and was severely wounded in the fight at Massard Prairie.
Realizing that they had been left on their own, the officers and men of the two companies on the right flank of the Union line began to fall back across the open prairie, trying to catch back up with the two companies that had been positioned on the left.
Confederate troops now swarmed after them. The Union soldiers knew that many of the Confederates were Native American and prisoners later told their captors that they continued to fight because they believed they would be massacred if they surrendered.
The running fight continued for about two miles across the open prairie, with Confederate cavalrymen striking the retreating Federals from all sides. By the time ended, the four company battalion of the 6th Kansas Cavalry would sustain nearly 40% casualties.
The battle finally came to a close when acting-Major Mefford was convinced to surrender by Confederate officers. Dead and wounded lay scattered across the prairie and more than 120 Union troops were now prisoners of Gano's men, along with massive quantities of commissary and camp supplies.
Our series on Massard Prairie will continue in the next post. Until then, you can read more on the battle by visiting www.exploresouthernhistory.com/massardprairie. Please also consider my new book, The Battle of Massard Prairie, now available by following the link.
Posted by Dale Cox at 1:41 PM