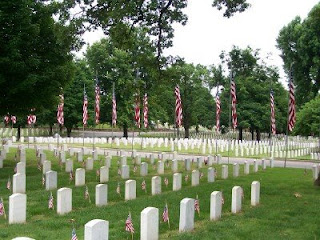 In observance of Memorial Day, I thought I would spend the next few days acquainting you with Fort Smith National Cemetery and some of the brave individuals now resting there.
Walking through this historic cemetery is like walking through history itself. Fort Smith National Cemetery is unique because it spans the the nearly two centuries of American presence on the Arkansas frontier.
The first graves here predate the Civil War and are those of soldiers and a few civilians who died at Fort Smith during its early days as a frontier military post.
The Civil War section is particularly unique because Union soldiers, both white and black, rest in graves side by side with their former Confederate enemies. This is extremely rare in America's national cemeteries and personally I find it to be a moving reminder of how our nation came back together following one of the bloodiest wars in history.
Other graves here include that of Judge Isaac C. Parker, the "hanging judge" of the Old West who helped bring law and order to the frontier at a time when it was said that, "There is no law west of St. Louis and no God west of Fort Smith." Also buried here is Gen. William O. Darby, the father of the U.S. Army Rangers.
We will continue our look at Fort Smith National Cemetery through the Memorial Day weekend.
Posted by Dale Cox at 12:51 PM