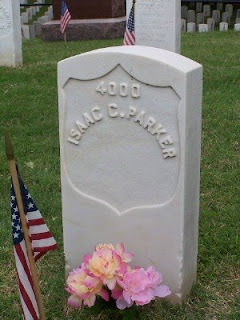 Continuing our Memorial Day weekend look at Fort Smith National Cemetery, this is the grave of Isaac C. Parker, the noted 19th century federal judge for the Western District of Arkansas.
Parker was the city attorney for St. Joseph, Missouri, when the Civil War began in 1861. Although he served in the 61st Missouri Emergency Regiment, he continued his duties as a public official throughout the war. In 1864 he was a member of the Electoral College that returned President Abraham Lincoln to office for a second term.
Parker served two terms in Congress (1870-1874) as a Radical Republican and in 1875 was appointed U.S. District Judge for the Western District of Arkansas by President U.S. Grant.
Judge Parker's jurisdiction included the Indian Territory of what is now Oklahoma. Numerous outlaws migrated to this region following the Civil War, believing they would be safe from justice. The peaceful inhabitants of the region were easy prey for these murderers and thieves and for years they had operated virtually unchallenged. Parker, however, assumed his bench with a commitment to bring law and order to the area.
His tenure on the bench at Fort Smith gained for him notoriety as the "Hanging Judge" of the Old West. Although he personally opposed the death penalty, Parker sent 79 convicted outlaws to the gallows in Fort Smith. It was the only sentence allowed by law in a number of the cases that came before his court. What is rarely mentioned, however, is that nearly as many of Parker's deputy marshals lost their lives in the line of duty to bring those 79 men to justice.
The days of Judge Parker's court provided the basis for such books and movies as True Grit, Rooster Cogburn and Hang 'Em High.
Judge Parker is buried in grave number 4000 at Fort Smith National Cemetery.
Our series will continue.