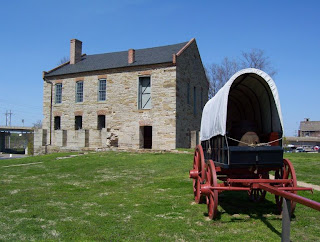 Cabell began withdrawing from his lines along the Poteau at around 9 p.m. on the night of August 31, 1863. Men were assigned to keep campfires burning to disguise the movement from the Federals.
At the same time, he sent back orders to Fort Smith instructing troops there to load as many supplies into wagons and possible and get them moving on the road to Waldron, Arkansas. The old road led southeast from Fort Smith by way of the community of Jenny Lind and present-day Greenwood to cross the Devil's Backbone near the latter community.
The supply trains of the army moved as well and wagons were soon strung out along the road. Cabell then put his infantry and artillery in motion, closing out his column with cavalry units assigned to skirmish with the Union troops when they advanced the next morning and draw them on into the ambush he planned to develop at Devil's Backbone.
The evacuation went well and General Blunt did not learn until the next morning that the Confederates were gone. Pushing across the Poteau, he advanced on Fort Smith. By the time he reached the post, however, Cabell had succeeded in pushing his wagon trains over the Devil's Backbone and to safety.
Planning his ambush, he positioned his men in a series of lines staggered up the sides of the Backbone at the point the Waldron Road climbed over the ridge. The first line was hidden in thick brush and timber at the base of the mountain and successive lines were placed in hiding at various points up the slope. The main battle line was then formed, along with the artillery, at the crest of the ridge where the stony spine of the mountain formed a natural rock breastwork. The Confederates strengthened this position by piling stones into low spots.
The cavalry, meanwhile, lingered behind to show themselves to the Federals when, as expected, they came on in pursuit of Cabell's column.
Our series will continue.
Posted by Dale Cox at 3:27 PM